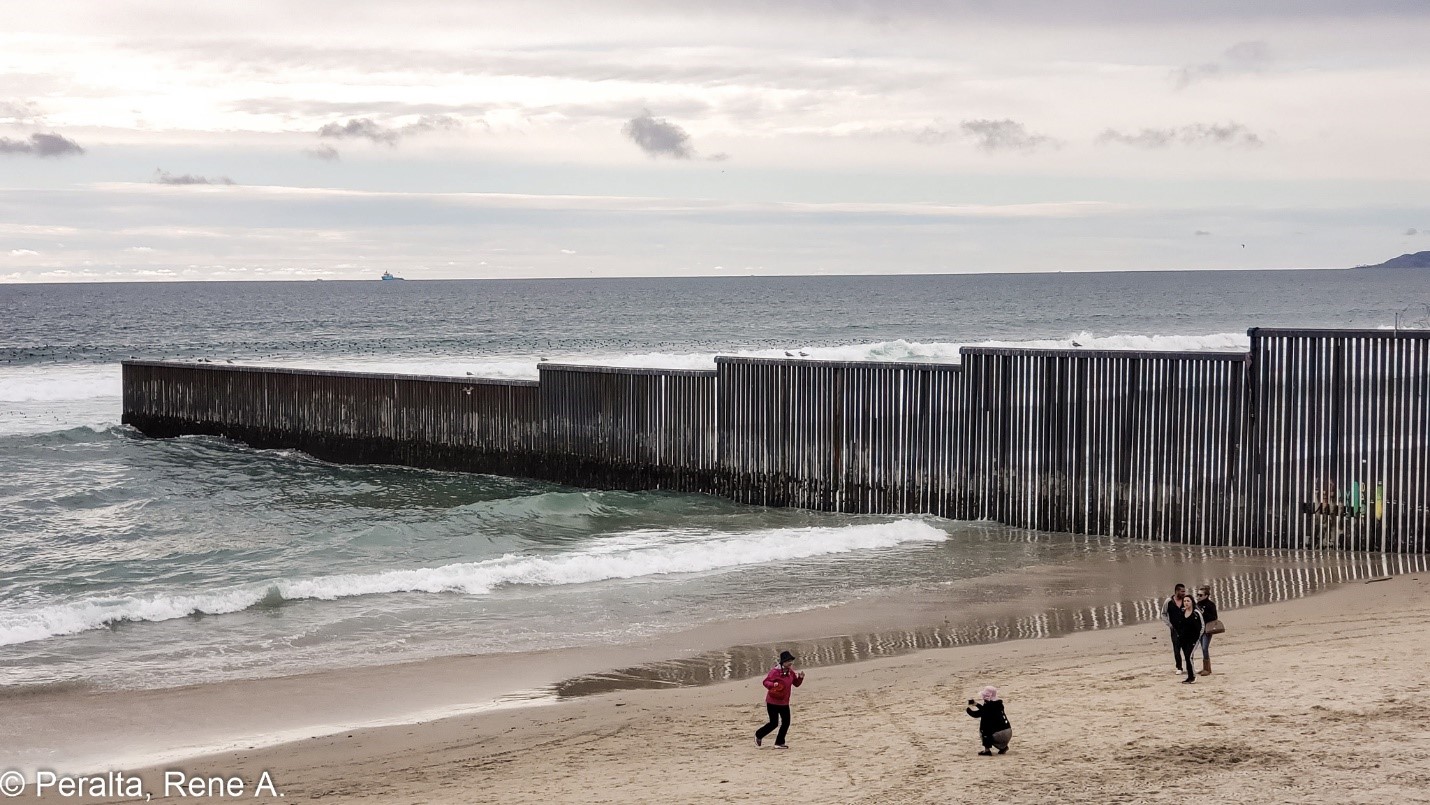 Schizoid-Urbanism in times of Pandemics

Interview conducted by journalist and writer Omar Millán by e-mail and elaborated during several weeks when the Covid-19 crisis was beginning in the United States and about to reach the Tijuana-San Diego border.

Omar Millán: They say that architecture, like other arts, begins with questions, what question comes to you when you see Tijuana, today’s Tijuana?

Rene Peralta: I understand Tijuana as a series of distinct spatial-temporal spaces. I am always asking myself if these different “Tijuanas” can exist together or they will reach a critical mass and divide, like a cell dividing in its critical moment. Future Tijuana will dive into new city units because it cannot continuously grow as a unified entity, if we think of the city as an organism then it is born, grows but does not continue to grow infinitely. Cities, in order to survive, must evolve and transform spatially (physically) and conceptually (social-cultural networks). We have seen Tijuana go through this transformation before when it plays out a series of conceptual arguments such as Ciudad Hibrida, La Tercera Nacion or via its economic shifts and spatial geography throughout the 20th century such as the industrial city, sin city, the informal migrant city or la Nueva Tijuana. Tijuana is a state of mind.

OM. How do define the metropolitan area?

RP. The word metropolitan comes from the Greek “mother city” and it consists of a large city, or two large cities, with a series of towns and neighborhoods that are economically and spatially integrated to the city or cities themselves. Tijuana is part of the metropolitan unit made up of the cities that include Tecate and Rosarito (ZMTTR). But in a more holistic and In terms of geography, we could include San Diego into the mix.

OM. To me, the lack of pyramids or a buried glorious past made the border a metropolis given over only to the present. Tijuana had myths – its very name is based on the fictitious Tia Juana – but they did not determine it.  The city always seemed to look with adolescent hopefulness to the future, optimistic, even though it was in the midst of two nations that hated and yearned each other, with two very different politics and languages, and had often taken out their frustrations and desires on this region. The border had tried to resemble both nations; and in that imitation, it paradoxically achieved its personality. Tijuana was a half-baked, incomplete, ambiguous city. However, in the last decade, a series of skyscrapers (condominiums, offices, private hospitals, hotels) began to be built that seems to completely define the course of Tijuana.

OM. First, what happened that led to this real estate boom?

RP. This new mode of building housing it is not really a direct copy of San Diego, The development goals of SD in the last 20 years has been directed to build more concentrated communities under the concepts of TODs or New Urbanism. In 2018 together with colleagues from San Diego and Tijuana, we reprinted Kevin Lynch and Donald Appleyard’s report for San Diego of 1974 titled A Temporary Paradise? You can still see that their findings and ideas of a sustainable landscape and urban plan are current development strategies of today. Hence in Tijuana, this boom is a product of a weak planning structure by way of market urbanism and investments from the south instead of the north. These new investors are searching for profitable places to develop vertical and high-density projects for middle and upper-class buyers, different from the low-income and working-class housing built in the 1990s that today are unfinished or abandoned and were basically a failure due to the financial crisis of 2008 and the unexistent urban planning of all those housing tracts.

So with the use of trendy marketing and commercialization, which in most cases is pretensions and classists, these new towers are appearing in the traditional communities of the city with the claim of being a great investment, rather than a home. So, you have buyers looking at this as part of an investment portfolio that they can rent in the Airbnb market. It’s a strange way to build housing because you build and then try to find people who want to live (invest) there, instead of knowing the needs of the current population already there and build for them. You can see that much of this new high-rise development is focused on US investors.

We are not seeing novel urban development only architectural objects appearing very quickly and we are discussing them in generic terms or as David Harvey might say as absolute spatial objects, quantifiable spaces of individualization ( i.e square meters, height, image, and other) lacking critical urban concepts.

These objects are vertical archipelagos of seclusion because not only they have to be tall and be able to produce gains but they also need to address the lack of security provided by the state at the street level. It is a capsular way of living as Belgian philosopher Lieven De Cauter points out,  but different from pod or capsules for the nomadic lifestyle of what the 60s architects such a the metabolism or archigram thought our world would need for free individuals with time to move as they please throughout the world, therefore, inhabiting minimal dwellings. De Cauter presents this idea as a much more dystopic condition where our society is polarized and we hide in our “vehicles, architectural cocoons, and urban enclaves.” We are shifting from horizontal (land) segregation into a vertical (architectonic) one and all in the name of a construed concept density.

Interestingly enough De Cauter also includes our daily techno-gadgets as part of this capsulization. Even as I critique this type of secluded living, the current world challenge with the COVID-19 virus might lead us to rely on seclusion and personal communication technology for our daily social activities. So this pandemic will add fuel to the fire and make secluded and isolated living much more attractive for those who can afford it. Capitalism never loses it thrives in times of conflict as we have seen in the past that is why is so difficult to think of an alternative. Architecture then becomes the vehicle through which capital re-adjusts itself, it seems that architecture it’s not for people anymore.

OM. Second, was the course of “our modernity” to look like an American city, “capitalist pride” with tinted glass buildings, or were there other alternatives, another course?

The urbanist Lawrence Herzog mentioned in his seminal book on Tijuana architecture “From Aztec to Hightech” (2001) that Tijuana never participated in the Mexican Modern movement, it never was part of it. It had to come later through mega-projects such as Zona Rio, Cecut, and others. Our identity was not a fixed one and therefore we had a clean slate to build something different in Mexico, and we did for a while in the arts, music, literature but it never consolidated into an architectural zeitgeist.  The few schools of architecture in the city were too traditional with curriculums that came from the center of the country. We missed the opportunity to form our own school, a Tijuana School such as Los Angeles, Philadelphia o New York did. I would argue that even San Diego did not build a school its architecture was a pastiche of conservative movements from other parts of the US.

So Tijuana had the opportunity to become an experimental ground for new ways of combining the formal with the informal but because these two ideas were so apart/segregated from each other as in all cities they never combined. We deviated from an urban form and a kind of Hybrid building and the opportunity to rethink a new kind of sovereignty where we could build a city parallel to the neo-capitalist production. But it did not happen because the forces were too strong, my generation is too involved in making money, instead of creating new ways of regional development we went back to the developer model known across the country.

It is interesting how real estate agents in the city share on social media vague posts about sustainable cities or walkable cities ideas that they believe are part of the building they are selling making them look like if they are aware of the current urbanism trends.

But what I am more interested in is what and how we are going to develop that other half of the city that lives on the periphery of almost 1 million inhabitants that have a distinct way of living and culture from what the media is selling you. A sector that was promised quality of life in these tiny homes.

As I finish this interview I am seeing how the COVID-19 virus is now closer to home at the border, a space between the moral panic of the north (San Diego) and the indifference of the south (Tijuana). Therefore this crisis will accelerate the subdivision of the city into two units with different socio-economic cultures and one will trigger vertical construction while the other might have a much more horizontal density, two very different event horizons.