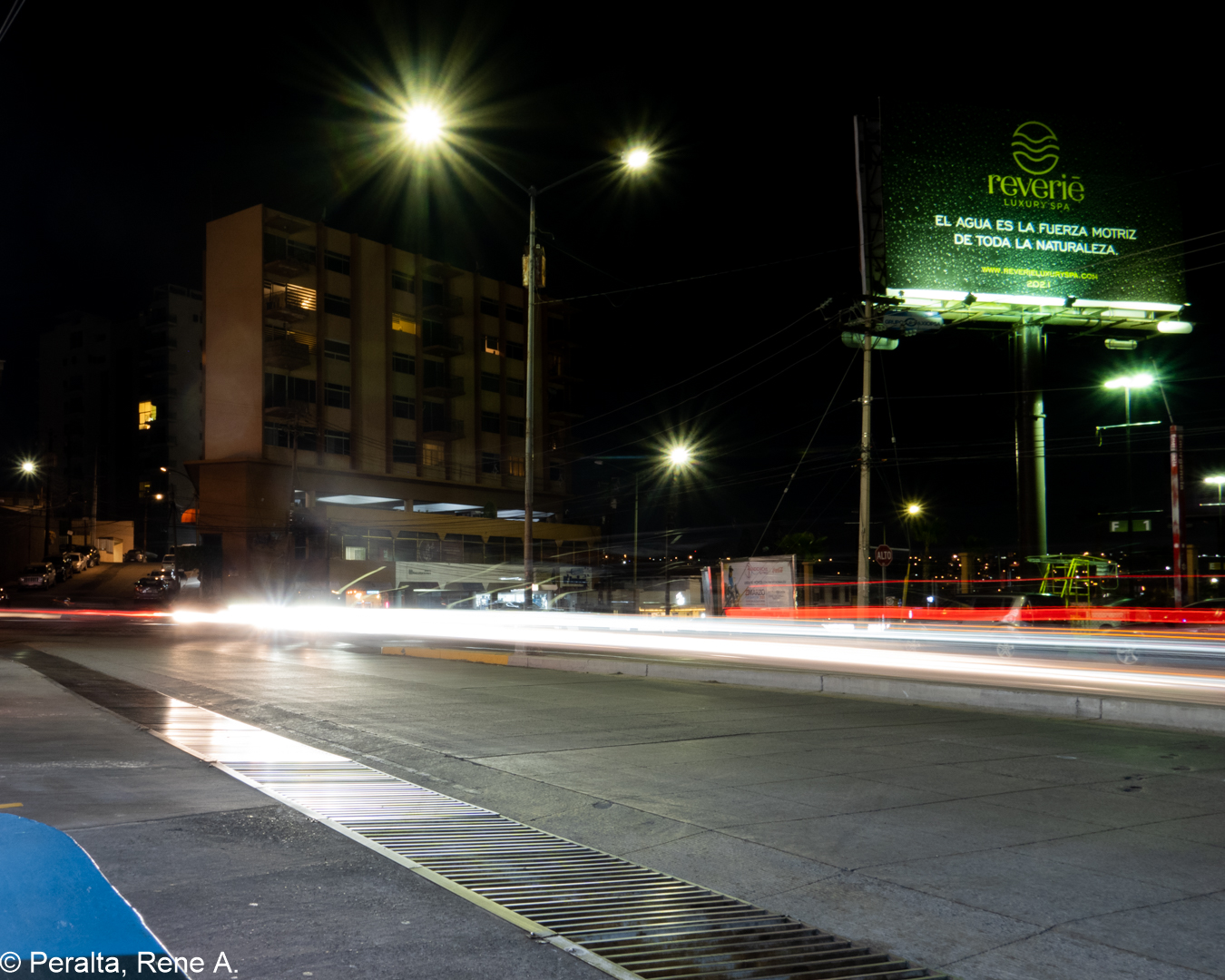 My daughter Angela and I went on a night stroll in our neighborhood, Colonia Hipodromo. It’s a middle-class community next to the racetrack (now the Cholos soccer stadium) and near to the border. Even with the pandemic, most shops on the main drag are open and with lots of people. When I was very young I would visit this street to eat tacos with my father after a day at the races, the taco stand is still there since 1970. The small stand was the only commercial place in what was a residential street. As in many of the neighborhoods in Tijuana, the commercial zoning was not part of the planning. As time went by some houses became restaurants and shops others were demolished to build pharmacies and markets. Today there is a push for high-rise apartment buildings in the area however the community is against them. I have started using the Sony RX100 VII a great pocket size camera with 4k Video. 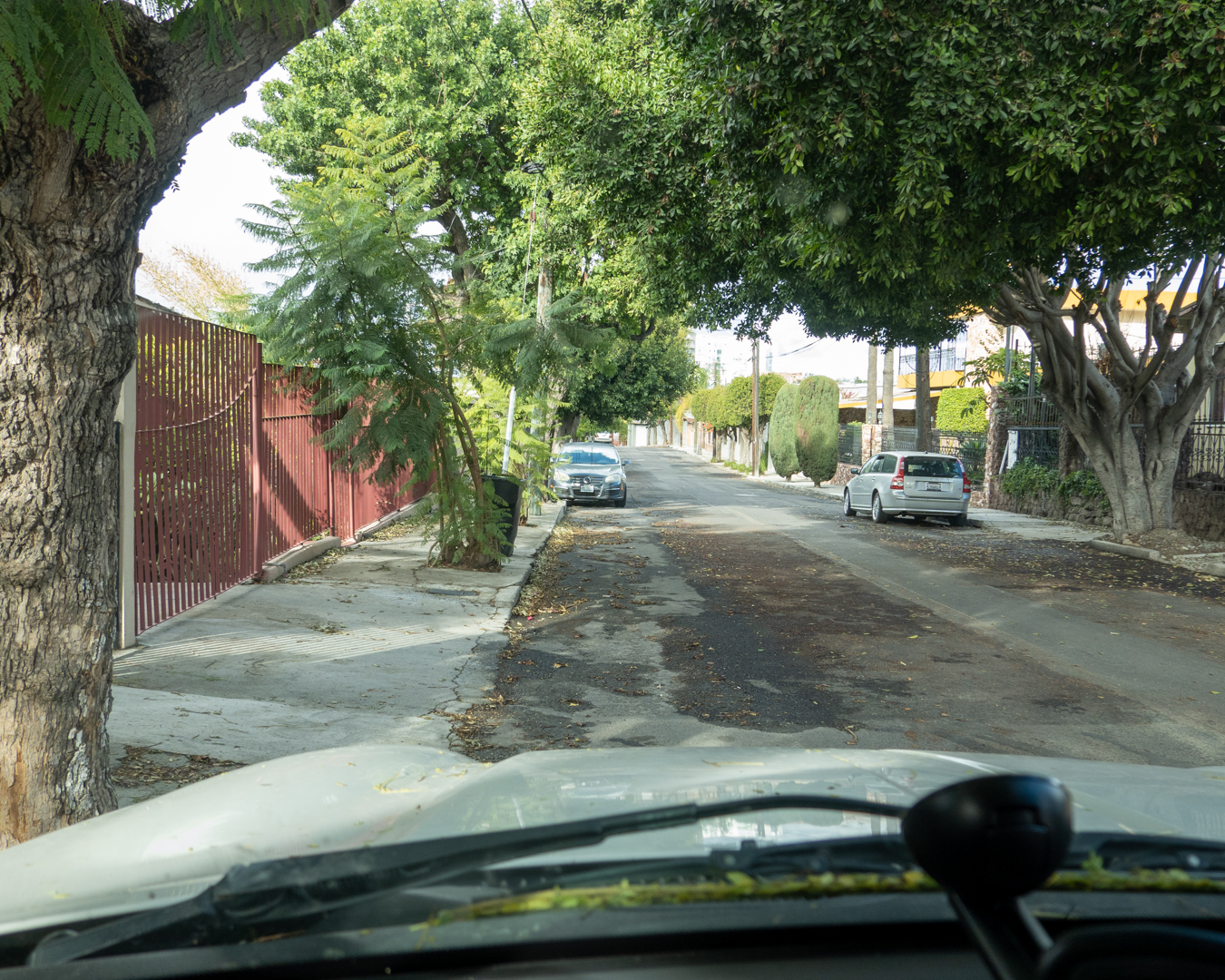 After five months at the University of Oklahoma in Norman, Oklahoma, I returned to Tijuana to spend the holiday with the family. I like to drive around the city, see changes, and what is going up regarding residential towers. I suspect that many projects have slowed their construction schedule, while others could not begin due to the Covid19 crisis.

However, as I drive around, I can see new towers in the same “hot” zones near the city’s economic center and close to the US/MX port of entry. If you drive through the streets of Tijuana, you will see that the city has not slowed down. Vehicular traffic and pedestrians seem to be operating at pre-pandemic levels. Many restaurants and cafes are open for business, and especially the street food stalls seem to have not seized to operate during 2020.

With this reluctance of the population to stay home, as of December 2020, Tijuana has reported 2300 deaths due to Covid19 while San Diego county only reporting 1400. San Diego county surpasses Tijuana by 1 million residents and has an urban footprint almost three times large. 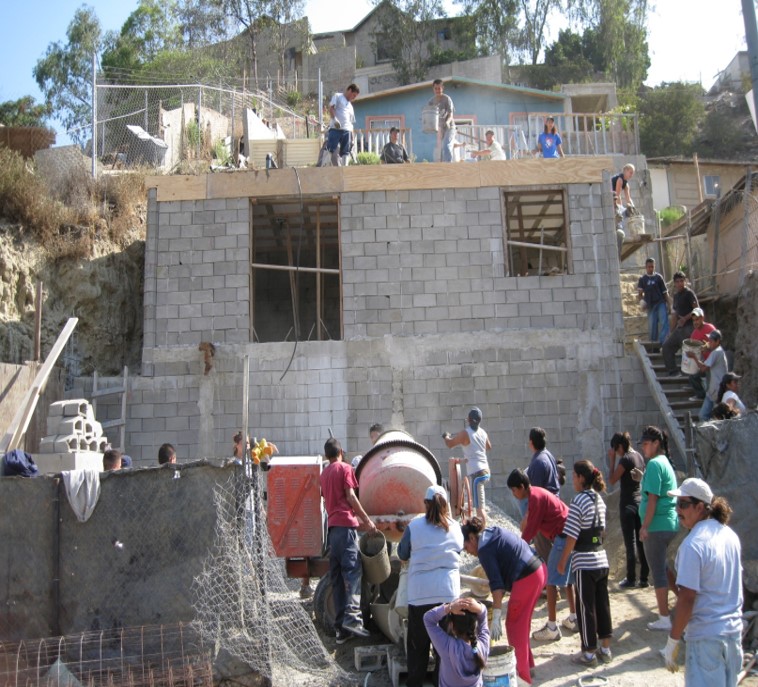 I have been giving it a thought to buy a 3d printer for my small office. The ideal situation would be to have the printer produce small components that we can use to build model houses based on a designed brick. Our work with  Fundacion Esperanza has relied on their 30-year system using a non-mortar self-locking block to build Tijuana houses.

The organization uses these types of blocks because the houses are built with volunteer non-skilled hands. This technique allows building a house with the local community’s combined participation and volunteers from across the United States and other parts of the world.

The blocks are produced in a block-machine operated by the families and supervised by the foundation’s technical staff. Later the blocks are transported to the construction site where the volunteers snap them together, and walls are completed when every other open cell is poured with concrete.

The 3d printed pieces can also be a didactical device to show the families and volunteers the building process. I am interested in two low-priced machines, one a filament printer ([Open Filament] da Vinci Jr Pro Wireless 3D) and the other that uses resin (EPAX E6 6″ Mono LCD Resin 3D Printer). We need to upgrade the construction process with new technology and materials that allow for a better structural and envrinmetal strategy.

We won the award for Audience Choice –

The revitalization of the Tijuana River channel as a solar power farm and binational water remediation infrastructure. A project that brings back the river canal to Tijuana communities with pedestrians and public spaces along the 11-mile channel. 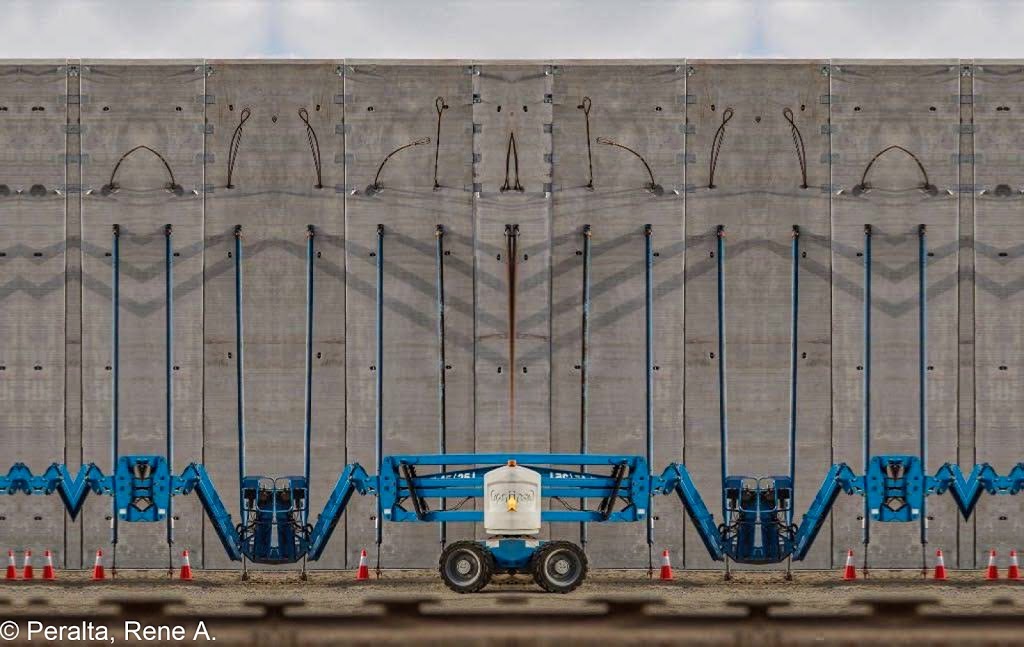 Local entrepreneurs, government officials, architects, artists and land use experts have floated many ideas over the past several decades that envision a very different border than the one we have – one that embraces the idea that the border is one community and one natural environment.

I want to thank Maya Srikrishnan for this great piece on future visions of the border and for allowing me to contribute 3 ideas we are working on. One is the Solar River presented at UC San Diego’s Border Innovation Challenge that received the audience choice award. 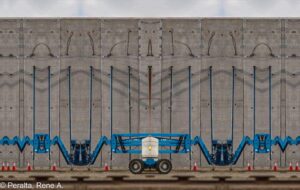 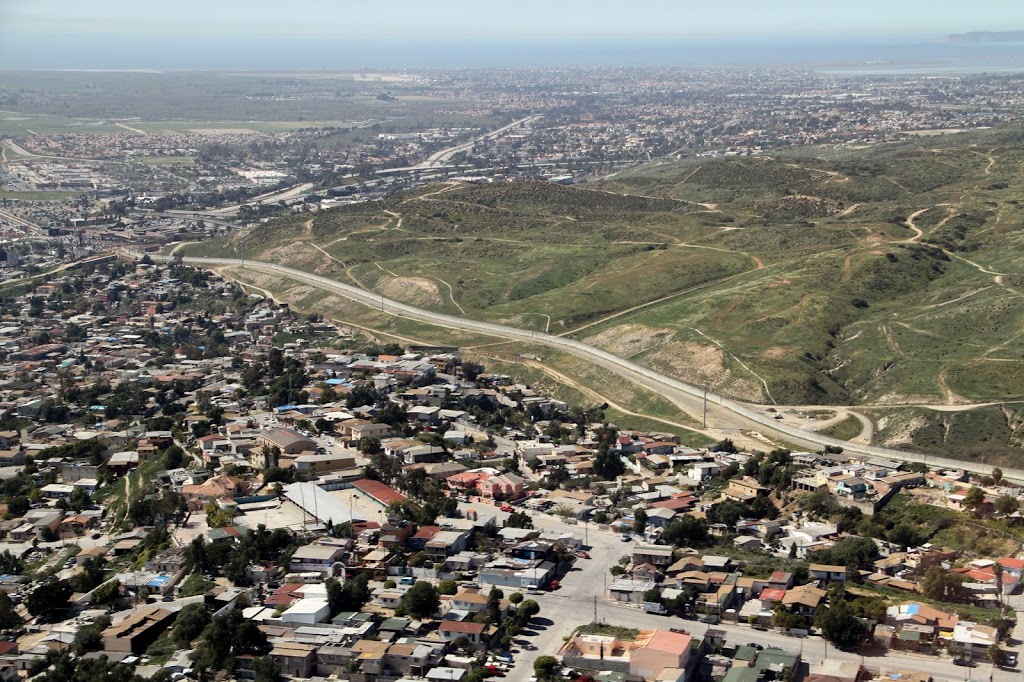 Here is a great interview on Tijuana I participated in. 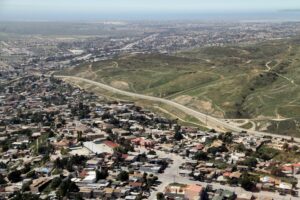 The Border Innovation Challenge, now in its second year, is a business plan competition focused on the challenges presented by the international border. This competition focuses on bringing to the spotlight promising solutions and technologies to meet the region’s ports of entry, efficiency, and security challenges. Supported by the Smart Border Coalition, the program is presented through a partnership of the Rady School of Management and the Jacobs School of Engineering. It is open to students, faculty, staff, and alumni from universities along the US/Mexico border region.

Join us on December 1st, when our finalists compete for $12,500 in prizes.

The project focuses on revitalizing the Tijuana River Channel as a solar power farm and binational water remediation infrastructure. A project that brings back the river canal to Tijuana communities with pedestrians and public spaces along the 11-mile channel.

We want to encourage the general public to register (https://bit.ly/BICEvent2020). There will be a prize for an audience choice, so every vote counts!

Each participant will have up to 7 minutes maximum to present. After 7 minutes, they will be muted to ensure we can keep things fair for everyone. Judges will have 5 minutes for Q&A.

Why I am still a Modernist

Why I am still a Modernist

As a professor passing through the heartland of America, I want to point out a series of concepts that I find interesting.

The French philosopher Jean Baudrillard known for such great books as Simulation and Simulacra wrote a type of diary of his experience in the US, titled “America”.

He traveled through the horizontal of the prairies, and deserts. He found that America is (by design) a made-up nation, where there are two concepts: a utopia or a territorialization (British citizens making a nation) and de-territorialization, a dystopia (the erasure of the people who inhabited the land earlier.)

And it’s this process that permeates our (I say “our” because I also choose to be a US citizen) thinking of the world.

Therefore, we have this power to choose our reality, as a clean slate no matter what the world throws at us.

In his book or journal, he comments:

“Americans believe in facts, but not in facticity”

In regards to living in this moment of “Corona Virus” what is now being described as a cliché is affecting many people worldwide especially in the “developing” world. Different from our reality, they cannot wear masks all the time or work from home, they gamble with their life because its either poverty or virology that will defeat them.

I want to share this thought regarding how humanity transcended the past world crisis.

During WW2, the world thought collectively on how we could overcome a crisis, such as totalitarian governments, i.e. nazis, and fascism.

People around the world enlisted in the military without any objection; global governments united to battle together, and industrialist made products that would support the struggle for world peace.

Today, we face a similar crisis, yet it is not an ideology but a biological agent.

So far during this pandemic, we have not been able to come together as a society, government, and industry, to solve- as we once did – our global adversary.

Today, every faction of society has a reason for how the crisis is affecting them. All have individual objectives; the young generations can’t cope with the psychological tension, the economy of nations struggle due to the preventive state public health measures and science wrestles to integrate into the world psyche the importance of medical facts and objectives.

Today our global society is not a unified cause against this crisis. Therefore, unless we pause our differentiation and postmodernism for a moment, we might return to a future of a diverse and safe world.

Published by Rene on July 9, 2020
Here is a summary of what I am doing at the University of Oklahoma. If you would like to get involved please email me at rperalta@ou.edu
https://gibbs.oucreate.com/architecture/ou-herb-greene-teaching-fellow-investigates-transpacific-border-regions/?fbclid=IwAR08oFn7PfYt0zc2YP2kwYOA19FreIUgb3HrGM5Vc3chlW45GXWYfprzaKo